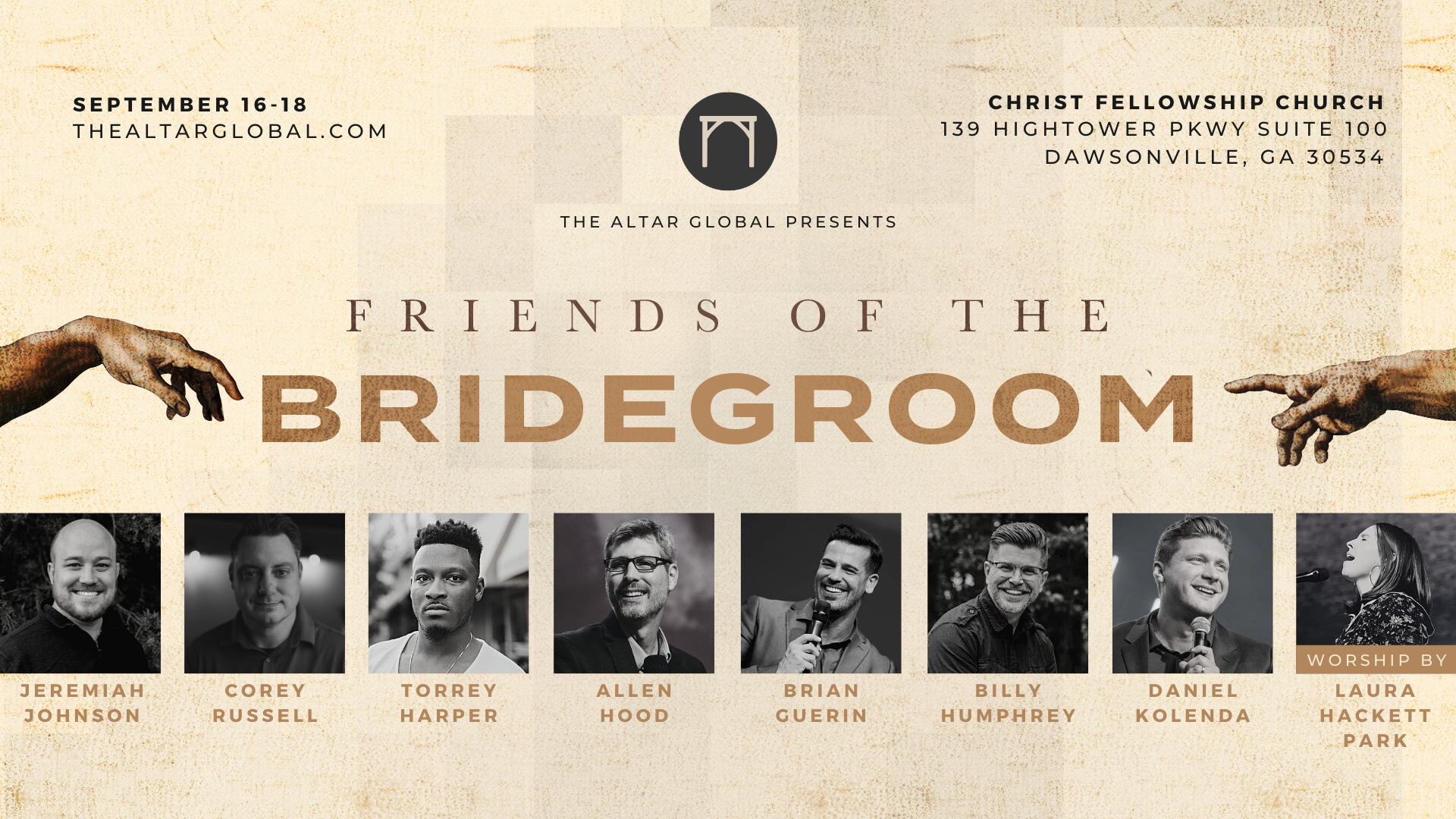 The Altar Global is hosting its second national conference with an incredible lineup of speakers and worship leaders who have truly been anointed for the end times. With a special emphasis on being friends of the Bridegroom and the harvest of souls that God wants to bring into His kingdom, we invite those who are hungry for a fresh outpouring of God’s Spirit to join us at this historic event. Like John the Baptist, who was a true friend of the Bridegroom, we believe that those who attend this conference will be marked with a fresh zeal for the return of Jesus Christ and will yearn to see souls saved like never before. Messengers who are burning and shining lamps in this generation are being called forth right now. Whether you’re a pastor, five-fold ministry leader, youth/young adult group, or single, make your plans to join us now!

Jeremiah Johnson planted “Heart of the Father Ministry” in Lakeland, FL and served on the leadership team for a decade. In 2020, he moved his family to Charlotte, NC where he founded “The Altar Global,” a movement of Christians who share a common urgency and desire for the return of Jesus Christ and the preparation of the Bride for that glorious Day. Jeremiah is a best-selling author of multiple books and travels extensively throughout the United States and abroad as a conference and guest speaker. He has been a guest on many popular Christian television and radio shows, such as Daystar, TBN, GodTV, Sid Roth’s It’s Supernatural, and the 700 Club. Jeremiah also oversees the “Altar School of Ministry” in Concord, NC, a one year intensive program available in-person and online that seeks to equip end time messengers in every sphere of society. For more information, please go to www.thealtarglobal.com or www.thealtar.school

Daniel Kolenda is a missionary evangelist who has led more than 22 million people to Christ face-to-face through his open-air evangelistic campaigns in some of the most dangerous and remote locations on earth. As the successor to world-renowned Evangelist Reinhard Bonnke, Daniel is the President and CEO of “Christ For All Nations,” a ministry that has conducted some of the largest evangelistic events in history and has published over 190 million books in 104 languages. Daniel also hosts an internationally syndicated television program and is a best-selling author of multiple books, such as “Live Before You Die” and “Slaying Dragons.”

Daniel is a gifted fifth-generation preacher whose ministry is marked by a powerful evangelistic anointing with signs following. The blind receive their sight, the lame walk, the deaf hear, the dead are raised, and the good news is preached to the poor. It is this single-minded gospel emphasis that makes the ministry of Daniel Kolenda and Christ for all Nations so unique.

Corey Russell’s passion is to awaken the church to the beauty of Jesus, intimacy with the Holy Spirit, the revelation of intercession, and a longing for Jesus’ return. After spending 18 years on the senior leadership team at the International House of Prayer in Kansas City, Corey and his family relocated to Dallas, TX to join the pastoral team at Upper Room Church. Corey has written five books and has also released five prayer CD’s.

Brian travels extensively throughout the world releasing the glory of God and ministers with a sharp prophetic edge. His ministry is marked by the tangible presence of God that rests in the meetings followed by signs, wonders, and miracles. Brian is a keynote speaker and author, sent out all over the world to preach and teach the Gospel. His ministry, “Bridal Glory International,” is impacting countless thousands each year through television and radio broadcasts such as TBN and GodTV. Brian’s main passion and emphasis in life are to draw the Bride of Christ into greater intimacy with the Bridegroom Himself, leading to the maturity of the Bride and the culmination of Jesus’ glorious return. Brian also enjoys bringing great emphasis and depth to the art of hearing the voice of God through dreams and visions.

Torrey Marcel Harper is the Founder and Senior Director of the “Global Prayer Room” located in the heart of New York City. Torrey carries a burning heart to see lives encounter the transforming presence of God and is passionate to see sustained reformation expressed in every sphere of society. Torrey is an emerging prophetic voice in this hour and moves strongly in words of knowledge, worship, and the supernatural. Torrey travels globally as an itinerant speaker and worship leader and is a frequent published voice with The Elijah List, Charisma Magazine, and Destiny Image. Torrey currently serves as the lead pastor of Habitation Church (NYC) and also serves as the senior leader of “Wildfires International,” an apostolic movement that helps bring spiritual alignment to pastors, churches, and leaders in ministry and marketplace arenas around the world.

Billy Humphrey carries a burning passion for revival and to see a generation made ready for the return of the Lord. In 2004, after serving as a local youth pastor for thirteen years, Billy planted the International House of Prayer (IHOP Atlanta) in Lawrenceville, GA. Within two years, IHOP Atlanta went 24/7 with live worship and prayer taking place around the clock.

In 2018, IHOP Atlanta merged with New Bridge Church to form a new spiritual family centered around live 24/7 worship and prayer. In 2021, IHOP Atlanta and NewBridge Church retired their respective names and together became “GateCity Church.” Today, Billy serves as the Director of GateCity Church, a spiritual family of multiple cultures and generations that is centered around 24/7 worship and prayer. GateCity has bases planted in seven different nations that is focused on bringing the Gospel to the unreached through prayer and missions.

A recording artist, songwriter, and worship leader, Laura Hackett Park currently resides in Kansas City with her husband and fellow songwriter, Jonas Park. Laura writes and leads worship songs for congregations across the world and has led weekly at the International House of Prayer in Kansas City since 2003. To date, she has led close to 10,000 hours of live worship sets.

With a vibrant collection of intimate worship songs, Laura has had the pleasure of working with talented musicians and producers from around the world. Most notably, she had the privilege of working with two Grammy and Dove awarded producers, Brown Bannister and Ben Shive, on her last record, “Love Will Have Its Day.” Laura has released songs on the last seven “Onething Live” albums and her song, “You Satisfy My Soul,” is her most popular song to date with over one million downloads.