A Tribute to R. Loren Sandford 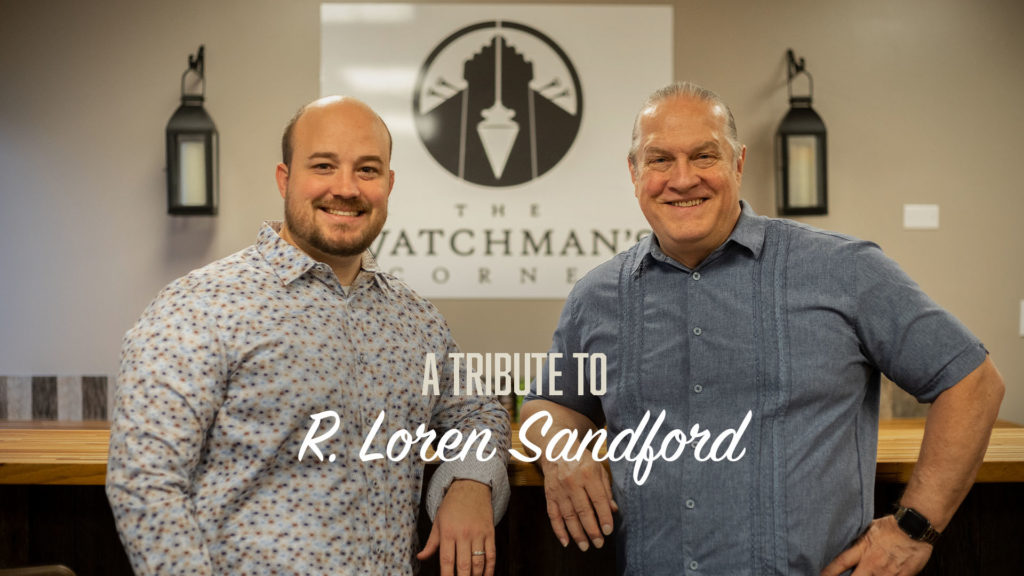 Years ago, I read an article in Charisma Magazine where the author shared his heart for purity in the contemporary prophetic movement, his longing to see character valued over gifting, and accountability established when prophetic words do not come to pass. He mentioned names like John Paul Jackson and his father John Sandford. I remember crying my eyes out in my bedroom in Florida at the time, thanking God that I had finally found an older man who shared a similar burden as I did as a young man. I knew there had to be so much more that what I had seen and experienced in the prophetic movement for decades.

I nervously decided to send him an email the next day, asking if he took appointments from people he had never met. He graciously said he would make an exception so I got on an airplane and flew across the country for my very first encounter with R. Loren Sandford. From the moment I sat in his office at New Song Church and Ministries in Denver, CO and stared into eyes, I found not only a friend but a father who would impart deep prophetic foundation on the inside of me that would change my life forever.

Over the years, Loren and I grew very close. We talked on the phone almost weekly, ministered alongside one another every year, and wrote a book together called, “The Micaiah Company: A Prophetic Reformation” in 2016. Even though more than 30 years separated Loren and I in age, we both shared a very similar burden for the contemporary prophetic movement. Loren was that father that I could call and pour my heart and concerns out and not be rejected. He was a constant listening ear and a voice of correction in my life on multiple occasions. I would not carry the foundation and value system I do regarding prophetic ministry without his direct influence in my life.

I admit that I am still stunned and deeply saddened by the passing of this great man of God. I truly believe his death is a tremendous loss to the contemporary prophetic movement. Anyone that knew him understood that he had a very real grasp on the heart of God according to the Scriptures and he was never afraid to speak what must be said, regardless of the fanfare. As a tribute to R. Loren Sandford, here are five main lessons I learned from him walking as a spiritual son underneath his guidance.

R. Loren Sanford was a true champion when it came to love and service to the local church. As a pastor for decades, his heart for people and their pain was tangible. He often called me on the phone in tears regarding situations that were happening at the church. He constantly shared his burden with me regarding traveling prophetic ministers who were not planted in a local church and actively laboring alongside church leadership to bring God’s kingdom to earth. I watched Loren’s love and commitment to the local church cost him many opportunities around the world. He just would not sacrifice the people he was called to shepherd over often times lucrative invitations. It was his constant voice in my life to stay rooted and grounded in the local assembly that has given me so much love and honor for the body of Christ. To Loren, I say thank you for your love, sacrifice, and commitment to the local church. How we desperately need more prophets and prophetic people to follow your example.

R. Loren Sandford was a major advocate of character and integrity. He was never impressed with individuals who could call out words of knowledge and work miracles if their marriage was a wreck. Many of the prophetic words he spoke into me personally had nothing to do with national ministry or open doors. The words were about my marriage and four children. Loren cared for others deeply. He told me on numerous occasions, “Jeremiah, God is way more interested in working in you than He is working through you.” To R. Loren Sandford, I say thank you for giving me a biblical value system of character and integrity for prophetic ministry. Thank you for all the hard talks and probing questions surrounding my wife and kids. Thank you for never being impressed by how accurately I prophesied or how many national invitations I took. You were a true father who knew when and how to speak truth. We desperately need more prophetic fathers like you in the earth today.

R. Loren Sandford perhaps more than any other area in my life greatly impacted my thinking and biblical understanding of the wilderness. His book, “Understanding Prophetic People” literally changed the trajectory of my life. I have handed out hundreds of copies of it over the years. Loren understood the pain, rejection, betrayal, and jealousy that all prophetic people will face in their lives. I went through two very serious seasons of the wilderness and I would have not made it through them healthy without Loren’s voice and counsel in my life. He challenged me to forgive, to work on my own character even in the midst of demonic accusation, and finally to understand that the wilderness is the place where prophetic people must go to find their voice. Loren’s wisdom and personal life experience just had a way of helping me to make sense of my life. He allowed me grieve, rejoice, and have a godly perspective on life.

To R. Loren Sanford, thank you for guiding me through multiple wilderness seasons. Thank you for challenging bitterness and resentment in my life toward God and His people. You loved me enough to refuse to allow carnality to rest in me. How we desperately need more seasoned men and women in the prophetic movement helping young ones find their way through the wilderness.

I remember a time in my life where the pain and rejection of ministry had reached an all-time high. I was confused, wounded, and broken. On the outside I was continuing to minister, prophesy, and travel all over the country. My flight path had me stopping in Denver on my way to Los Angeles. Knowing what I was going through, Loren said he would come to the airport and visit with me during my layover. I was overcome with tears, realizing he actually cared about me personally. So much spiritual fathering and mothering these days is all centered on “ministry” but with Loren, my experience with him was a constant reminder that he really was concerned with the wellbeing of me and my family.

As we sat in the airport together that day, I just started to cry. He sat there quiet as he often did, just listening to the Lord and getting in tune with where I was really at emotionally and spiritually. He grabbed me by the hand and said, “Son, if Jesus had to endure what He did, you and I will never get a free pass. But always remember, when He asked the Father to forgive those who persecuted him, he empowered us to forgive and lay down our lives for the body of Christ.” It was that night that I set my heart to never allow rejection and bitterness to pollute the prophetic ministry God has given me.

R. Loren Sandford was always burdened by the lack of emphasis on the cross of Jesus Christ and death to self in the charismatic movement. He believed many of the inner healing and deliverance circles were drifting into humanistic idealogy centered on the victimization of people and not the power that is in the blood of Jesus Christ. For as long as I knew him, Loren was always fixed on Jesus. He longed to see Christ as the central focus of the prophetic movement, not another famous prophet. He challenged me to read the gospels again and again. “Give yourself to cross centered ministry” he would say to me often.

He was also very alarmed by the biblical illiteracy he often saw. As a graduate of Fuller Theology Seminary, Loren really valued the Word of God over supernatural experiences. “That will sell but that does not line up with Scripture” is a phrase I heard him use often. To R. Loren Sandford, for your love and esteem for the Word of God and calling me to faithfully preach the cross of Jesus Christ, I want to say thank you. How the contemporary prophetic movement desperately needs to be centered on the Cross again. I will never forget your late-night talks with me about the spirit of Baal that you believed has entered many American churches and ministries. Thank you for opening up my eyes with truth again and again.

R. Loren Sandford must have recounted to me hundreds of inaccurate prophecies he had heard over the years by well known voices. It deeply grieved him beyond words that most of them never repented. He had a fundamental belief that many people reject prophetic ministry because of this. Not that prophets miss it at times, but that most of them never acknowledge that they were in error.

His term for this was, “rubber band prophecy”. He believed prophets would often times change dates and even add to what they originally prophesied in order to save their reputation. “If we are going to work together and I hear you prophesy something that does not come to pass, I am going to call you on it” Loren would say to me often. His highest concern was always God’s reputation, not a man’s. For instilling the fear of God inside of me concerning His voice and committing to repent if I miss a prophecy, I want to say thank you to R. Loren Sandford. Although owning a mistake this year on a national level cost me more than I could have ever imagined, thank you for your example of transparency and humility. Living with a clear conscious is always more desirable to the fame and riches of this world. In the end, we desperately want and need all eyes on Jesus Christ!

To those who never had the privilege of knowing this father, husband, pastor, prophetic voice, and spiritual father to many, I encourage you to read his books and follow his sermons online. Loren was so burdened for the body of Christ during the pandemic that he recorded of video of encouragement almost every week on YouTube. Again, his heart of concern and care for God’s people never wavered.

To those who did know him and walked alongside of him in any capacity, we must now realize that a mantle of prophetic reformation has fallen in the earth and must now be picked up. May character, integrity, humility, purity, and healthy marriage and family be the hallmark of a new prophetic generation rising.

It is my commitment that from this day forward, I will become the prophetic father to others that R. Loren Sandford was to me.

With Honor and Tears,